Friction is a force produced between two surfaces when one object rubs against the other. Friction always works against the motion. The lesson below, friction for kids, teaches about the science behind the force of friction.

(Click ‘Forces and Motion’ to learn about different types of forces around us.)

Friction is the force produced between two surfaces when they are rubbing or sliding against each other. 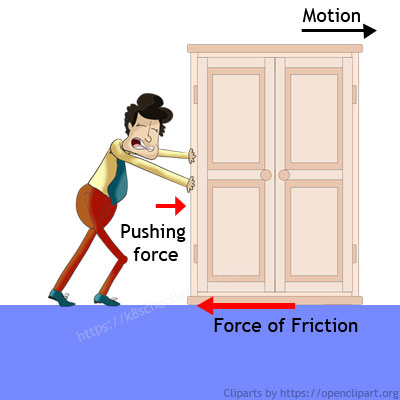 How friction applies when pushing something

Let’s learn more about this now, with Friction for Kids.

The force of friction always works in the opposite direction to the movement.

So, friction occurs when two surfaces stick to each other a little.

Friction always slows a moving object down, because it tries to stop the surfaces from sliding over one another.

How friction applies when driving

How friction applies when pushing something

Let’s now see how more and less friction apply in our daily life, with Friction for Kids.

Where do you think, you can walk easily? On a rough surface or a smooth surface?

If you are unsure about your answer, let’s ask the question in a different way.

Where do you think you can walk easily? On the road or on ice?

The answer will obviously be on the road. Now if you think about these two surfaces; the surface of the road is rough whereas the surface of ice is smooth.