The human skeleton is made up of bones. An adult skeleton consists of 206 bones. Our skeleton acts as an internal framework and its bones help muscles to act as levers to move the legs, arms and other body parts. We could no longer move our body without bones. In fact, you will look like a huge blob of jelly, without the skeleton.

Have you ever thought that you would look like a huge blob of jelly without your skeleton? 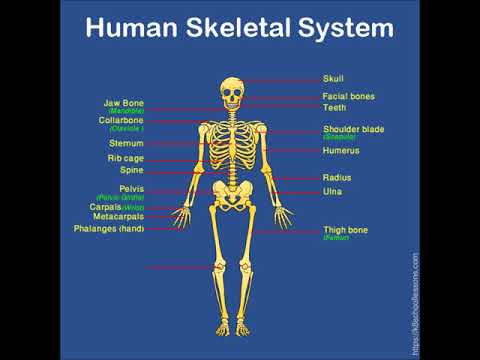 What does our skeleton do?

Our skeleton helps us in many ways as follows;

1. Our skeleton provides shape and support to the body.

2. It protects the internal organs such as the brain, the heart,  and the lungs and keep them in their proper place.

3. It helps us to move as our muscles are attached to our bones.

The skull includes the jaw bone and the facial bones. It also has a cavity, called the cranium to protect the brain.

The breastbone is a long flat bone. It is located in the centre of the chest. It connects to the ribs with cartilage.

The rib cage is formed by the backbone, breastbone, ribs and cartilages. It protects the heart and lungs.

The backbone is also known as the  spine or vertebral column. It is made up of 33 irregular bones, called vertebrae.

The collarbone is a long bone that acts as a rod between the shoulder blade and the breastbone to link them. Collarbone is the only long bone in our body that lies horizontally.

The right and the left collarbones

The shoulder blade connects the upper arm bone with the collarbone.

The right and the left shoulder blades

The upper arm bone is a long bone in the upper arm. It runs from the shoulder to the elbow.

The forearm bones run parallel to each other. One is the Radius and the other is the Ulna. They connect the elbow with the wrist.

Bones in the human hand are divided into three groups. They are;

Bone structure of the left hand

This is a symmetrical bone that looks like a basin. It protects the digestive and reproductive organs and the rectum. The thigh bone connects to the hip bone.

The thigh bone is also known as the femur. Thigh bone is the longest and the strongest bone in the human skeletal system. It extends from the hip to the knee.

The kneecap is a circular-triangular bone. It connects to the thigh bone.

The Shinbone and the Calf Bone

Bones in the human foot are divided into three groups. They are;

Bone structure of the right foot