This lesson provides interesting hurricanes facts for kids. Read through the lesson to know more facts about hurricanes.

What is a hurricane?

Hurricane is the name given to violent storms that originate (begin) over the tropical or subtropical warm waters of the Atlantic Ocean, Caribbean Sea, Gulf of Mexico, or North Pacific Ocean. A hurricane is a powerful storm with pouring rains and strong winds. Hurricanes start over the ocean. They form over warm water. Hurricanes grow stronger if they stay over warm water. But they grow weaker over cold water. In the western Pacific Ocean, hurricanes are called. Hurricanes near Australia and India are called tropical cyclones.

When the air is much warmer than the surface of the ocean over the tropics, the winds pick up huge amounts of energy and water vapour as they rush towards the land. When the wind speed reaches 120 kph (120 kilometers per hour) a hurricane is created. Learn hurricanes facts about their characteristics.

Characteristics of a hurricane

Eye of the hurricane

Can hurricanes be predicted?

A hurricane takes several days to travel from the ocean to the land. Weather scientists called Meteorologists watch for hurricanes at sea during summer and autumn. They use radar, weather satellites, and instruments in the sea. They try to figure out which way the hurricane is traveling. Sometimes special airplanes fly into the hurricane to make measurements.

Meteorologists warn people when a hurricane is headed their way. They tell people to leave the area. Predicting hurricanes can save many lives. Learn hurricanes facts about their destruction.

A hurricane lasts for a week or two. Hurricanes produce massive amounts of rain. Some hurricanes head for land. Hurricanes can do a lot of damage if they come up on land.

Hurricane damage occurs mainly on the coast and on island.  Hurricanes grow weaker the farther inland they go. 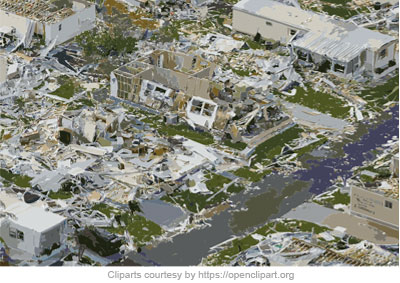 A few examples of hurricanes happened in the world