Reversible changes are changes that can be undone or reversed. Melting, freezing, boiling, evaporating, condensing, dissolving and also, changing the shape of a substance are examples of reversible changes.

What are reversible changes?

Reversible changes are changes that can be undone or reversed.

Give another name for reversible changes.

Characteristics of a reversible change

Reversible changes fall under different processes. They are;

(Boiling and evaporation are the two types of vaporization)

Now let’s see the examples of reversible changes or physical changes involved in these different processes.

Following are some of the reversible changes examples.

When chocolate is heated until it melts, the melted chocolate can be changed back into solid chocolate by cooling or freezing. 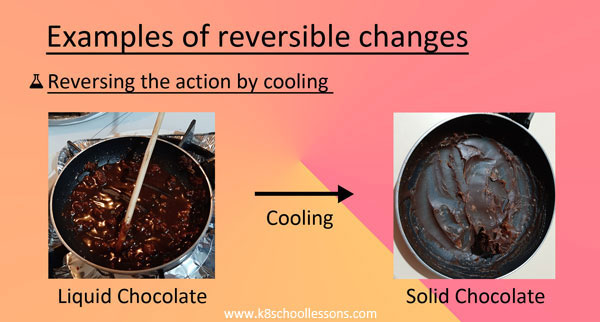 When candle wax is heated, the solid wax melts and becomes a liquid. If you cool the molten wax, it becomes a solid again.

When you keep some cubes of ice outside the freezer for a few minutes, you can see how they melt and turn into liquid water. 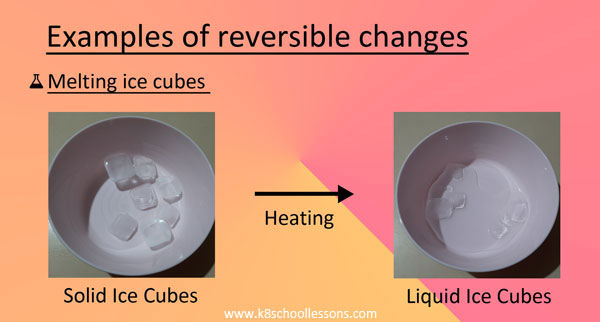 If you pour this water in a tray of ice cubes and keep in the freezer for some time, you can make ice cubes back.

Heat some butter and see how it melts. Keep the melted butter back in the fridge and get solid butter back. 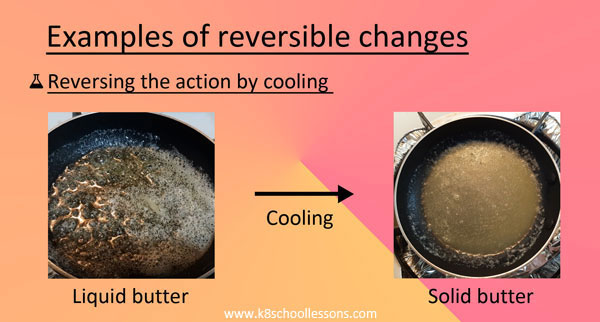 People cast metal into shapes by melting them into a liquid. Melted metal is poured into molds. As the metal cools, it solidifies. This is how people make metal objects with different shapes. Alluminium, iron, lead, copper, gold and silver are popular types of metal that are melted. Also, brass, bronze and steel are some examples of metal alloys created by melting metal.

Plastic can also be melted and pour into different molds to get different shapes. After cooling down, you can get solid plastic back.

When we put some water in the freezer of a refrigerator it will turn into ice. If we then warm ice it melts and changes back into water.

Lava is molten rock. Rock can be melted due to the extreme heat at the centre of the earth and turns into a liquid called ‘magma’. Magma gushes out of the earth’s weakest surfaces as a volcanic eruption. The runny magma that flows from the volcano is called ‘lava’. Lava that runs out of volcanoes cools down quickly.

You can boil some water and turn it into a gas, which is water vapour. We also call this ‘steam’. This process is called ‘evaporation’.

If you could capture all the steam that is made when a kettle boils, you could turn it back to water by letting it cool. This process is called ‘condensation’

Substances like iodine and dry ice can directly change to the gaseous state when they are heated. This process is called ‘sublimation’.

When solid iodine crystals are heated they directly form a purple gas without passing through a liquid state. 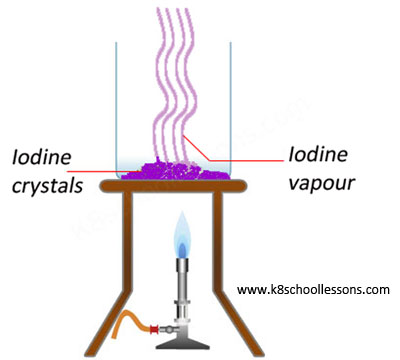 Dry ice is carbon dioxide in its solid form. It turns directly into a gas when heated, instead of melting into a liquid.

When salt is mixed with water it disappears because it dissolves in the water to make salty water. We call this salt solution. The salt in the solution can be recovered by boiling off the water.

You can make a sugar solution by dissolving sugar crystals in water. When you heat the solution, the water in it will evaporate leaving behind the sugar.

Changing the shape of a substance

Example (1) – Blowing up a balloon

When you blow up a balloon the shape of the balloon is changed. If you let the air inside the balloon go it will come back to its usual shape. This physical change is reversible. 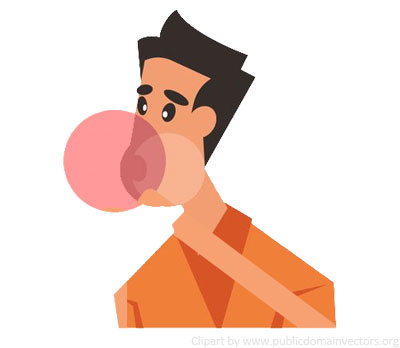 Example (2) – Crumpling a piece of paper

When you crumple a piece of paper it will become creased and wrinkled. However, neither the amount of matter in the paper nor the material the paper is made is changed. This change is reversible. 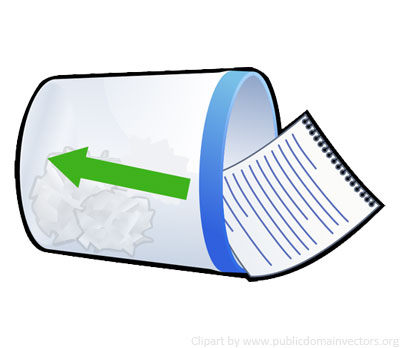 When you cut a piece of wood in half, you change its shape. But you do not alter the way the wood is made.

Similarly, when you cut, tear or break something you just alter its shape by dividing the substance into some parts. The amount of matter in the substance and the material which the substance is made are not changed.

These types of changes are physical changes which are not reversible.

When you mold some clay into a pot, the shape of clay is changed, but no new matter or material is formed. You can turn the pot back into the same chunk of clay before you bake it in the kiln. This physical change is reversible.

When you sharpen a pencil, you change the physical appearance or the shape of the pencil. Also, some amount of matter is separated from the pencil, but no matter or material of the pencil is chemically changed. This physical change is not reversible.

When you stretch a rubber band, you alter its shape, but it is still made of rubber. When you let it go it will come back to its usual shape. This physical change is reversible.

Similarly, when you squash a sponge, you alter its shape, but it is still made of sponge. When you let it go it will come back to its usual shape. This physical change is also reversible.

A sand and gravel mixture consists of solid particles of different sizes. Sieving is the best method to separate mixtures like this.

Filtering is used to separate mixtures like water and insoluble substances such as sand. 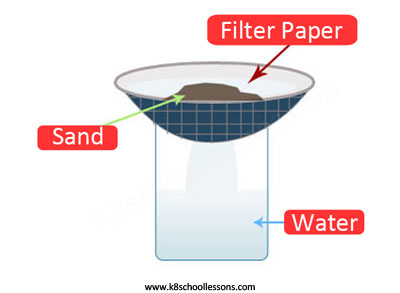 To separate a mixture of sand and salt, first the mixture should be mixed with water and then filtered, lastly evaporated.

What is happening in these steps? First the salt dissolves in the water, then sand filters off and lastly, water evaporates to leave the salt.

Magnetism and crystallization are some advanced processes of physical changes.

The process of magnetism is reversible, and no new materials are formed as it does not affect the chemical composition.

The type, shape and the size of crystals can be changed by heating, rolling or hammering. However, no new materials are formed.